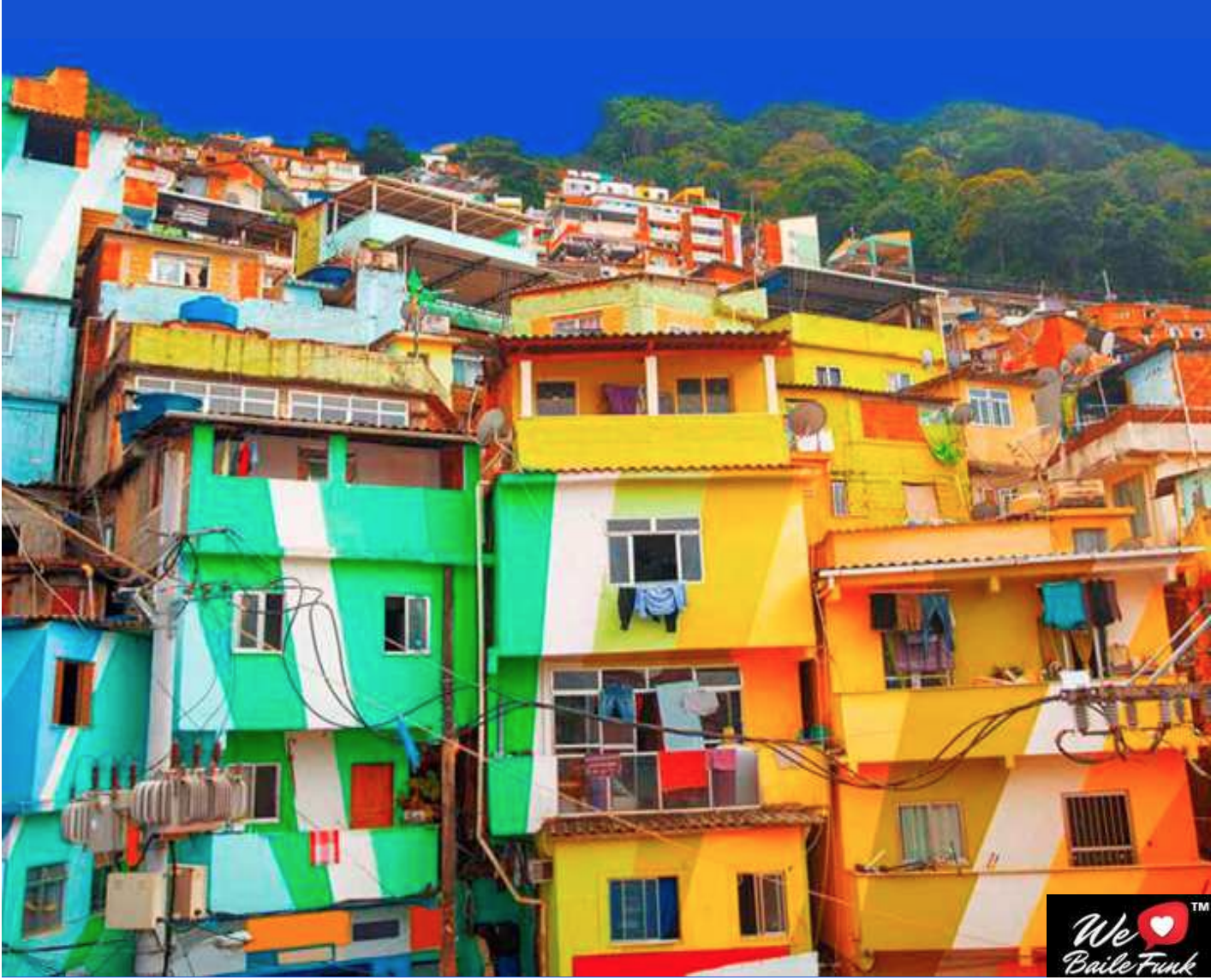 Baile Funk Music started out as Funk carioca, a version of Miami bass and freestyle music (specifically from the artist Stevie B), from New York City. Funk carioca popularized in the 1980s in the Rio de Janeiro’s favelas, the city’s slums. From the mid-1990s on, it was a mainstream phenomenon in Brazil. Funk songs discuss topics as varied as poverty, human dignity, racial pride of black people, sex, violence, and social injustice. Social analysts believe that funk carioca is a genuine expression of the severe social issues that burden the poor people of Rio and eventually city of Sao Paulo. Sao Paulo’s artists were able to commercialize the genre even more calling it Baile Funk Music and helping it gain massive popularity throughout Brazil’s population of 280 million. Artists are now able to reach 100-500 million views, creating much larger numbers of streams and downloads.

Until the year 2000, funk carioca was only a regional phenomenon but then in London, duo Tetine assembled a compilation album called Slum Dunk Presents Funk Carioca, and also ran the weekly radio show that broadcasted all over Europe. In Italy, Irma Records released a funk compilation album and also from Italy, a talented artist Sandra D’Angelo, was the first Italian singer-producer to bring funk carioca to Italy. In Germany, label Man Recordings released Gringão, the debut album by German MC Gringo.

As of recent, Baile Funk Music has taken over the Americas, with J. Balvin, Maluma, Jeremiah and Future, all doing collaborations with the Brazilian artists, such as Nego do Borel , Anitta and Ludmilla respectively. This is a genre that it’s popularity has been brewing for about 20 years and is now about to explode on the world stage!

WeLoveBaileFunk Vol. 1, The first single “Come this Way” (feat. Dynasty) already has the industry buzzing and is on major radio stations across the country including on rotation on Hot97FM which is the standard and main radio station for Hip hop music. It has reached 2 million views in it’s third week since being released and with all the radio and TV promotions, it is projected to reach at least 10 million views. The Video features Ze Pequeno, the actor from the movie “City of God”, which has garnished worldwide acclaim and has won the Sundance and Cannes film festival awards. The video has been able to attract all the major media networks from Brasil and the United States. MTV Brasil has also prepared a documentary and video release that will air in Brasil on May 15, 2018. BET Jams in the United States will also have a video release shortly after.

Our second single from our album “We love Baile Funk”, will be called “Spring Love Cutie”, an ode to the original song “Spring Love” by Stevie B., who will also feature in the video, but with a Brazilian sound. Stevie B’s popularity with the old and new generations will help push this song to different demographics and will all also cross into different cultural groups. Stevie B is not only a legend in Brasil but is also revered in the Latin and urban communities as well as the Italian communities of the northeast, Florida and the rest of the Latin communities across the country. With Brazilian music growing in popularity, the song will deliver Stevie’s message with a new, contemporary style of music that will connect with the younger generations as well. The song is free of any profanity and negative context so it can be played in multiple outlets, channels and parties, including weddings and family functions because it is a classic song that charted in the past. The Video took place in Brasil, and will also have some scenes with Stevie B reminiscing on his “Spring Love” to take audiences down a trip through memory lane. It is however, updated with the current fashion trends and shot in 4K to give it a more vivid and vibrant picture.

#WeLoveBaileFunk Volume 1 WeLoveBaileFunk Vol. 1, is a compilation album that will merge some of the top artists in the US and in Latin American Hip Hop, rapping and singing over Baile Funk Music tracks. Artists like Sean, Paul, N.O.R.E., G-Unit’s Uncle Murder, Jadakiss and Jim Jones have all committed to the #WeLoveBaileFunk album. DJ Chubby Chub who is the host and an Executive Producer in the Album has been able to usher in this new wave of music to the marquis names in the industry. The first single “Come this Way” (feat. Dynasty) already has the industry buzzing and is on major radio stations across the country including Hot97FM!

There is no better fitted DJ than Chubby Chub to introduce the world, to the Brazilian music “Spring Love”. Chubby Chub’s appreciation of this new genre, stems not only being of Latino descent (Puerto Rico) himself, but also his familiarity with the New England’s large Brazilian community and he has been touring Brazil since the early 2000s. DJ Chubby Chub’s respect and repertoire stems from him being the DJ for Jayz’s first hip hop group in 90’s, Original Flavor, and then becoming a Heavy Hitter and the tour DJ for 50 Cent. Chubby Chub was also a Music Director, Mix Show Coordinator, Mixer, and on air personality on Boston’s HOT 97.7 FM and has worked with such artists as P.Diddy, Mariah Carey, Busta Rhymes, Fat Joe, Nore, Kelis, Fabulous, and many more. Most recently, Chubby Chub was with Kelis on a nationwide tour with Brittany Spears. He has also made appearances on Rap City, TRL, 106 & Park; Live with Regis and Kelly, and Late Night with Carson Daley. Brazilian Baile Funk that as of recent has become the latest trend in the ever-changing music scene. Chubby Chub’s appreciation of this new genre, stems from his familiarity with the New England’s large Brazilian community and while touring Brazil since the early 2000s. In 2018, Chubby launched his new project “WeLoveBaileFunk”, and was able not only to shoot the video for “Come this Way”, but also go on a promotional tour in Brasil with lots of TV and media about the album that will combine the top artists of the US and Latin America You will undoubtedly know when Chubby Chub has entered the building!!!

Born in Rio Piedras, Puerto Rico and raised in Jamaica Queens and East New York, Brooklyn, New York City, Dynasty grew up during the rise of Dancehall in the US. Raised with Shabba Ranks and Super Cat era. He adapted the singing style of Jamaican Patois, giving shape to the electric artist he is today. And has performed at All over United States, the Caribbean and South America, including the Billboard Latin Music, Calle Ocho Festival, Latin GRAMMY ®sharing the stage with Daddy Yankee, Tego Calderón, Busta Rhymes, Beenie Man, Pitbul, Don Omar, Serani and Buju Banton. “Come Over”, the single from his mixtape was well received and got heavy rotation on NYC HOT97FM radio station. In March 2018, went to Brasil to participate in his video for “Come this Way”, and on a promotional tour, performing in TV shows and interview with the major media outlets such as Globo, Rolling Stones, Billboard Brasil and interviews for MTV Brasil.

While Dancehall’s music has continued to be a rich cultural element in the communities of New York City and abroad, the fusion of English / Spanish bi- lingual shows and songs have really ushered in a new era across the globe. With songs like “Despacito” reaching new heights and changing the face of Television and Radio, Dynasty is ready to lead the way.

Singer, songwriter, and producer Stevie B. was among the leading lights of the Miami dance music scene of the late ’80s, later reaching the top of the pop charts with the mega-hit “Because I Love You (The Postman Song).”

Born Fort Lauderdale, Florida, Stevie B worked in various jobs before charting with his 1987 national club smash, “Party Your Body”. It was also the title track of his 1988 debut LP, which eventually went gold. In 1989, he had his first top 40 hits with “I Wanna Be the One,” “In My Eyes” and “Love Me For Life.” With his 1990 album, Love & Emotion, he reached the height of his success, with the accompanying single, “Because I Love You” enjoying four weeks at number one on the U.S. Billboard Hot 100 in December 1990. He had two subsequent top 15 hits from Love and Emotion with “I’ll Be by Your Side” and the title track from the album.

He has found new fame in Brazil, where he not only appears regularly on radio shows but continues to sell out concerts to tens of thousands of fans, many hailing from the slums (favelas) of both Rio de Janeiro and São Paulo, due to the popularity of his style of music with urban youth.

Subscribe to our weekly newsletter below and never miss the latest product or an exclusive offer.

We use cookies to ensure that we give you the best experience on our website. If you continue to use this site we will assume that you are happy with it.Accept