Exeggcute, Bulbasaur, Charmander, Zubat and Pidgey are some of the 15 characters that a player can capture during the first 30 minutes of playing Pokémon Go. After only a week on the market it has over 7.5 million downloads in the United States alone. It has already passed Tinder in popularity and now is almost as used as Twitter.  You don’t need statistics to demonstrate its popularity – in New York people can be seen walking around the streets with their phones in their hands focusing in trying to find Pokémon everywhere.

It is impossible to not let my curiosity get to me, so I decided to download the app and try to capture the characters that I have always heard about. This weekend I installed it and let it guide me through New York on my first Pokémon quest.

Shapes and colors bring me from one street to other. I see a familiar map of East Village with “training gyms” and various landmarks highlighted, called Pokéstops. I see a Pokémon one block away in Tomkins Square. My character walks with me through the world as I approach Bulbasaur. I look up just in time to avoid crashing into Sheri, a 20 year old student who has being playing the game since the moment it was released. “I’m going back to my childhood; all my friends around are playing it”. She is already on level 12. I find myself a little jealous that I am only a level 3. She says that she is “not hardcore, I’m very random about it, but it’s a reason to get out of the house and to walk around the neighborhood to exercise”. 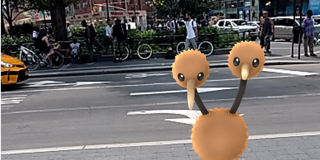 This game, based on a real map that uses GPS to recognize the different streets you walk on, is not only adding to the daily smartphone addiction, it’s also affecting the stock market. Nintendo’s shares rose 25% in Tokyo, making the company gain around $7 billion in market capitalization. 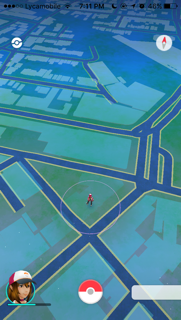 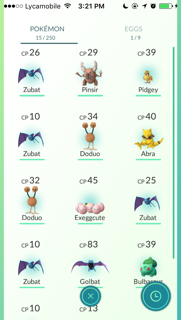 However, Pokemon isn’t just fun and games. Security problems have also been reported in cities like O’fallon, Mussouri, where four men attracted at least nine gamers by placing a “beacon” drawing them to an abandoned parking lot to rob them at gunpoint

Pokemon GO is just insane right now. This is in Central Park. It's basically been HQ for Pokemon GO. pic.twitter.com/3v2VfEHzNA

What do you think? Cancel reply